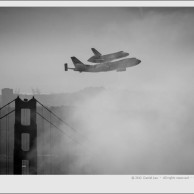 Today we had a once in a lifetime event in San Francisco: the Space Shuttle Endeavour mounted on top of the Shuttle Carrier Aircraft (SCA), a modified Boeing 747, made a low attitude fly-by through the Bay Area on its way to retirement in Los Angeles. I was on top of Hawk Hill in the END_OF_DOCUMENT_TOKEN_TO_BE_REPLACED

When I was asked to join the black&white photo challenge, I immediately knew that I did not want to use already published images. So I either selected unpublished work or created new work.  But during this process I thought it would be nice to highlight some of previously published oldies as well. So here we go. END_OF_DOCUMENT_TOKEN_TO_BE_REPLACED 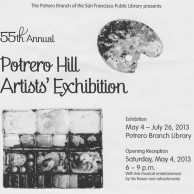 Last Saturday was the opening of the 55th Annual Potrero Hill Artists’ Exhibition at the Potrero Branch of the San Francisco Public Library. I am excited that my print of the Space Shuttle Endeavour flying over the Golden Gate Bridge is part of the show! I captured this last September when the shuttle flew through END_OF_DOCUMENT_TOKEN_TO_BE_REPLACED

This is the second installment of my 10 favorite photos of the year compilation. Here is the link to last year’s favorites in case you want to see them (again). Apart from shooting in my backyard (San Francisco Bay Area), up and down the Pacific coast and in the Sierra Nevada (especially Yosemite), I traveled to END_OF_DOCUMENT_TOKEN_TO_BE_REPLACED 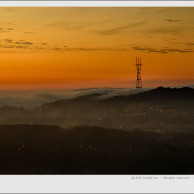 Since I already planed to go to Hawk Hill in the Golden Gate National Recreation Area to photograph the fly-by of the Space Shuttle Endeavour (link), I decided to get up a few hours earlier to capture the sunrise as well. This is something I wanted to do for a long time but never had END_OF_DOCUMENT_TOKEN_TO_BE_REPLACED