Early November is fall color season in Yosemite National Park. Since last year’s winter was very dry, most waterfalls have dried up and the rivers are running very low. Maybe that’s the reason this beautiful park is not crowded anymore. Now is a great time to visit! I was in Yosemite about the same time last year END_OF_DOCUMENT_TOKEN_TO_BE_REPLACED

It is this time of the year where one revisits the past 12 months. For me, among others, this means reviewing some of the 13,000 images I took during the year and select my favorites. Let me tell you that’s not an easy task! Already during the year, I pre select candidates.  But at the end, END_OF_DOCUMENT_TOKEN_TO_BE_REPLACED 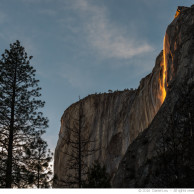 Each February, a small seasonal waterfall on the east side of Yosemite’s El Capitan brings on a show: the setting sun illuminates Horsetail Fall. When looked at it from the eastern side, this backlit waterfall glows intensely for a few minutes before dusk. It is something beautiful to see. Some call this effect the natural END_OF_DOCUMENT_TOKEN_TO_BE_REPLACED

This is the fifth time that I have made a selection of my 10 favorite images of the year. It is always a very informative and fulfilling exercise. Here are the links to the previous year’s selections: 2011, 2012, 2013 and 2014 My Lightroom catalog tells me that I took almost 20,000 images in 2015. END_OF_DOCUMENT_TOKEN_TO_BE_REPLACED

In the last 10 days, Yosemite and the entire Sierra Nevada received ample amounts of precipitation. Having some free time on hand, we decided to make a short trip to Yosemite National Park to experience what we haven’t been able to see in the last few years: Yosemite with plenty of snow! When we arrived END_OF_DOCUMENT_TOKEN_TO_BE_REPLACED

A few weeks ago, we spent a weekend in Yosemite. In the morning we enjoyed the Fall Colors in the Yosemite Valley I talked about in a previous post (link), later in the day, we headed up to Glacier Point to enjoy the sunset. While the sun was setting, I noticed a patch of light on a END_OF_DOCUMENT_TOKEN_TO_BE_REPLACED

Here are some impressions from a weekend in Yosemite. The first day it was nice and sunny, the second day we had rain. Two totally different sceneries presented us. We already thought that the sunset is over. But wait, the sky opened up and the sun found its spot and illuminated Half Dome. The next END_OF_DOCUMENT_TOKEN_TO_BE_REPLACED