I spent last weekend in the Eastern Sierra enjoying fall colors. It was a very delightful, although windy and cold, trip. Late Sunday afternoon, while I stopped at the gas station in Lee Vining, a few snowflakes started falling down. A storm system was moving into the Sierra. Since I didn’t want to cross 120 during a END_OF_DOCUMENT_TOKEN_TO_BE_REPLACED 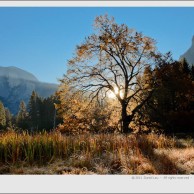 Right now in late October is a good time to make sunrise pictures. The light is beautiful and sunrise is rather late in the morning. For a while now, I was looking forward to photograph the famous Elm tree in Yosemite’s Cook’s Meadow backlit by the rising sun. As it turned out, I was not END_OF_DOCUMENT_TOKEN_TO_BE_REPLACED

It is this time of the year where one revisits the past 12 months. For me, among others, this means reviewing some of the 13,000 images I took during the year and select my favorites. Let me tell you that’s not an easy task! Already during the year, I pre select candidates.  But at the end, END_OF_DOCUMENT_TOKEN_TO_BE_REPLACED

A few weeks ago, I spent a weekend in Yosemite. It was yet another reminder how fast the weather can change. At 6pm the sun was shining, at 7pm it rained and at 8pm, the clouds parted for a beautiful sunset. For that sunset, I went to Olmsted Point since it provides nice views in different END_OF_DOCUMENT_TOKEN_TO_BE_REPLACED

In the last 10 days, Yosemite and the entire Sierra Nevada received ample amounts of precipitation. Having some free time on hand, we decided to make a short trip to Yosemite National Park to experience what we haven’t been able to see in the last few years: Yosemite with plenty of snow! When we arrived END_OF_DOCUMENT_TOKEN_TO_BE_REPLACED

When I was asked to join the black&white photo challenge, I immediately knew that I did not want to use already published images. So I either selected unpublished work or created new work.  But during this process I thought it would be nice to highlight some of previously published oldies as well. So here we go. END_OF_DOCUMENT_TOKEN_TO_BE_REPLACED

A while ago, my friend Regis challenged me to take part of the Five Day Black and White Photo Challenge. The aim is to post a new b/w image for five consecutive days and invite someone each day to join the quest. I have posted the images on social media, but thought it would be nice to END_OF_DOCUMENT_TOKEN_TO_BE_REPLACED

A few weeks ago, we spent a weekend in Yosemite. In the morning we enjoyed the Fall Colors in the Yosemite Valley I talked about in a previous post (link), later in the day, we headed up to Glacier Point to enjoy the sunset. While the sun was setting, I noticed a patch of light on a END_OF_DOCUMENT_TOKEN_TO_BE_REPLACED

Early November is fall color season in Yosemite National Park. Since last year’s winter was very dry, most waterfalls have dried up and the rivers are running very low. Maybe that’s the reason this beautiful park is not crowded anymore. Now is a great time to visit! I was in Yosemite about the same time last year END_OF_DOCUMENT_TOKEN_TO_BE_REPLACED