Another attraction in Guiyang is the Qianling Park and its the Hongfu temple. This park is huge (1052.7 acres) and supports different activities. There is a cable car to get to the Kanzhu Pavilion, which is on top of the Qianling Mountain and provides a nice overlook of Guiyang city. Unfortunately, the weather wasn’t what we hoped for and the entire city was covered with low hanging clouds and it was quite smoggy. Still, Guiyang, with a population of more than 3 million, showed its skyline dominated by highrises. As you can see, more are under construction.

Turning around and looking the other way offers a different look. The park is dominated by several tree covered mountain chains with the Hongfu Temple nested inside.

Hiking down from the Kanzhu Pavilion to the Hongfu Temple, we encountered this site that has several columns and statues. We don’t know the meaning of it, but we enjoyed the vista.

Next stop was the Hongfu Temple. This is the largest Zen-Buddhism temple in the Guizhou Province. It was built in 1667 by Emperor Kangxi and opened to the public only in 1993.

There are several halls, and if I got it right, we started with the Mahavira Hall and the gilded statues of Sakyamuni and the 18 Arhats. There was no documentation or explanation in English, so we were kind of lost, but we still enjoyed being in this beautiful place.

This was intriguing: it was not just a matter of throwing coins into the fountain, but there were small pots resting at the bottom that the coins had to reach. This guy was very happy when he hit the pot. I guess it meant good fortune, richness or something like that.

Continuing our visit, we saw this imposing buddha standing in the middle of a pool with fish and turtles swimming in it, surrounded by two halls and a lot of trees. 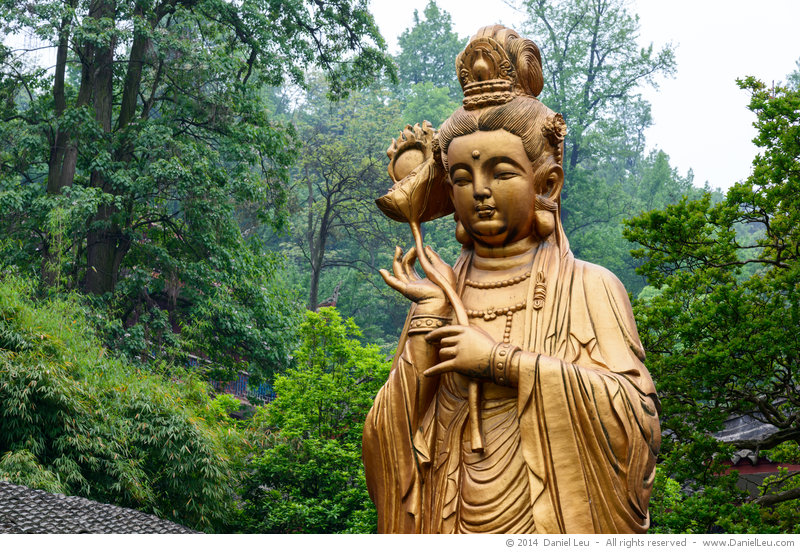 This is its reflection in the pool with goldfishes and a turtle.

All the buildings were decorated and the roofs adorned with elephants, fish and snake sculptures.

And since this was an active temple, monks were present as well.

Obviously we were there to photograph the temple and its monks. But as it turned out, they (and others) were interested into photographing us too. Here, a monk wanted a picture of me, so of course, I got one of him too!

I was surprised how many young people were there for paying their respect. 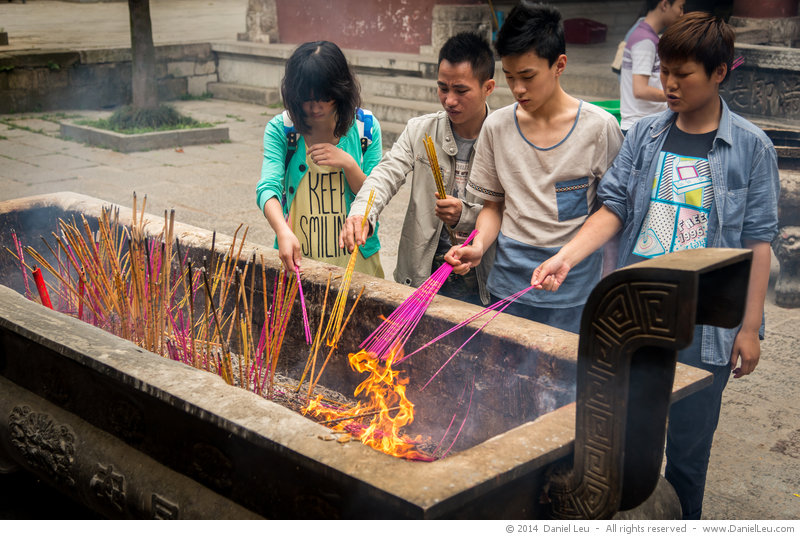 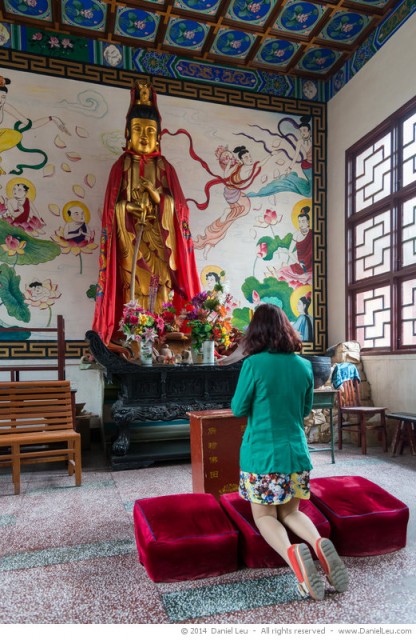 Outside of the temple’s entrance gate were vendors offering their services. In particular, they were renting traditional dresses and photographic services so tourists could leave with a picture for their photo album.

The park also hosts a Monkey Garden. And there were plenty of ‘wild’ monkeys and they didn’t mind to mingle with all the tourists. 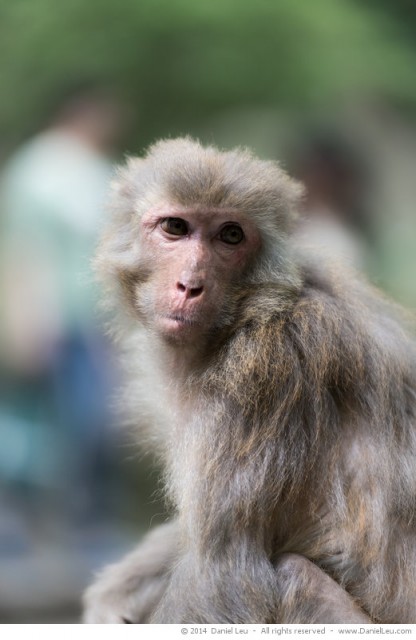 The Qianling Lake at the bottom of Qianling mountain is another attraction, on the opposite side of the park entrance. Walking down to that lake, we encountered this palm reader sitting on the side of the trail. He told us our fortune in Chinese (which we didn’t understand) accentuated with hand gestures. In the end he wrote it down on paper and later we had friends translating it for us.

We were not expecting the number of people we saw once we arrived at the lake. This was a very popular destination. But we didn’t encounter many people on the way down to the lake, so it was puzzling.  An hour later on our way back it was obvious what happened: there is a tunnel connecting the park’s main entrance to this lake. Ooh, it was marked on the map at the entrance. If one only could read Chinese….

Do you notice the red/orange dots in the image? Yes, these are swim vests. Most of them still hanging under the sunshade…

Just before the exit, there were a chain of ponds and bridges, and rare pink dots on the water. It was a bit too early in the year, but in a few months these ponds will be covered with the blooming water lilies.

We had a great time in the park. The next morning would be the official start of our photography tour in the Guizhou province.


Prints and Licensing: All images are available as fine art prints and for licensing. Please contact me for more details.